TORONTO, May 25, 2022 /CNW/ - Toronto Hydro is sending 26 employees to Ottawa to help restore power following a thunderstorm that impacted residents across Ontario this past weekend. 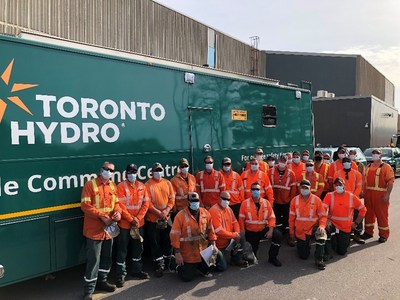 Hydro Ottawa is dealing with significant damage to its distribution and transmission equipment throughout its service territory as a result of high winds, heavy rain and lightning on May 21, 2022 and nearly 60,000 customers currently remain without power. Hydro Ottawa made a formal request for storm assistance through the Ontario Mutual Aid Group (OnMAG) and accepted our formal storm assistance proposal. Toronto Hydro crews will be travelling to Ottawa today to provide emergency assistance and help restore power to critical infrastructure in the region.

Toronto Hydro has made significant progress responding to storm damage across Toronto ― including a high volume of downed wires and fallen tree limbs. At the peak of the storm, approximately 110,000 Toronto Hydro customers were without power. However, Toronto Hydro has now successfully restored power to more than 99.8 percent of impacted customers and will continue to work around the clock to address safety emergencies and restore all remaining localized outages in the city. Sending crews to Ottawa will not delay any remaining restoration efforts in Toronto.

Toronto Hydro is reminding customers who come across downed wires to stay back at least 10 metres ― about the length of a school bus ― and report it to us immediately at 416-542-8000 (press 1).

"We've seen the extensive damage that Saturday's storm caused across the province. Thanks to the dedication of our crews and the patience of our customers, we've made significant progress in our restoration efforts at home, and we're fortunate that we now have the capacity to help our neighbours in Ottawa as they deal with significant damage throughout their city."